#CHI4Good gives me a chance to see real world HCI issues from the POV of people I rarely get to see. A chance to learn, do good, and grow!

There is so much to see and do in San Jose, in the heart of Silicon Valley. Minutes away from the San Jose McEnery Convention Center in Downtown San Jose is dining, entertainment and attractions including the Tech Museum, the Children’s’ Discovery Museum and the San Jose Opera House. It’s convenient to the headquarters of leading technology companies — Google, Facebook, Yahoo, Twitter, Evernote, Slack, Apple and more — as well as countless startups, each of which could be the Next Big Thing. The area is also a haven for academic talent: Stanford University, UC Berkeley, California College of the Arts, San Jose State University, and more all contribute to CHI and the HCI community. For those looking to extend their stay, within an easy drive are the world-famous vineyards of Sonoma and Napa Valleys, as well as the rich cultural offerings of San Francisco, Oakland and Berkeley.

Closer to the conference, we will add local dining and entertainment suggestions.

Travel to San Jose and around the Bay Area

500 parking spaces are available directly below the McEnery Convention Center. Entrances to the main convention center garage are located at 408 South Almaden Boulevard or 350 South Market Street. The current rate is $1.00 per 20 minutes up to $20.00 per day maximum.

Limited parking for hotel guests is located at each of the CHI16 conference hotels. Additional public parking lots are also located in the vicinity of the Convention Center. See the San Jose local parking map.

From SJC: To take the VTA from San Jose Airport, take the #10 Airport Flyer bus to the Metro Airport VTA Station, then transfer to a VTA train that goes to the Convention Center VTA Station directly across the street from the McEnery Convention Center (such as the #901 going toward Santa Teresa).

General: Conference members arriving at SFO can easily take BART (Bay Area Rapid Transit) to a Caltrain stop, which comes within walking distance of the convention center and local hotels. Caltrain also connects downtown San Jose to other Bay Area cities, from Gilroy to San Francisco. Caltrains run every 30-60 minutes on both weekends and weekdays. Caltrain tickets range from $2.25 to $9.75 one-way, depending on distance traveled. Additional Caltrain information.

From SFO: To travel from SFO to the convention center, follow signs to the SFO Airtrain (the train connecting the terminals of the SFO airport) and BART, take BART towards Millbrae, transfer to the Millbrae Caltrain station traveling Southbound, and disembark at the San Jose Amtrak Diridon station (see map of the area). From this Caltrain station, you can take VTA light rail, bus, taxi or walk 7 blocks to the McEnery Convention Center. 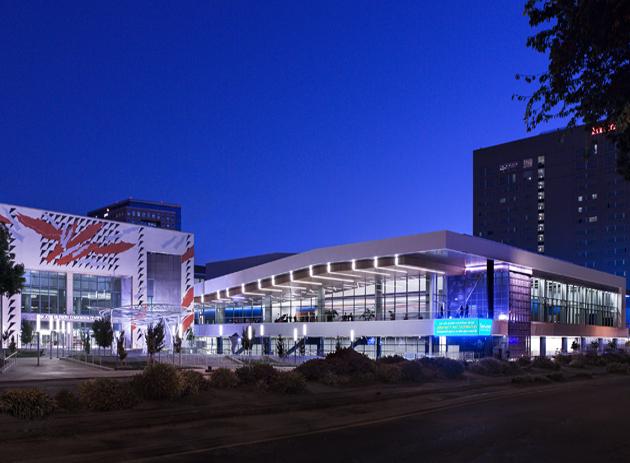 San Jose, CA 95113 (see a map). was renovated in 2014, with fully upgraded internet access capable of handling even CHI’s bandwidth requirements. It is fully accessible, with a complete accessibility report from the CHI 2016 Accessibility Team coming soon.

CHI 2016 has contracted with the San Jose Marriott, the Hilton San Jose, and the Hyatt Place San Jose, each of which is convenient to the conference center and wheelchair accessible. Limited parking for hotel guests is located at each of the CHI2016 conference hotels. We will provide details, including rates, closer to the conference.